Torontoians read about Germany’s surrender on VE-Day. Old City Hall is in the background.

For Remembrance Day this year, I thought I would change things up and take a look at a couple of primary sources to see how three newspapers from Toronto described the end of World War I and II. For those interested in more traditional posts, please check out Armistice Day, The End of World War II in Canada, and Veterans’ Stories: Morkin and Strachan. END_OF_DOCUMENT_TOKEN_TO_BE_REPLACED

The Canadian Forces faced one of their toughest battles during World War II during December 1943. Their goal? Capture the small coastal town of Ortona, Italy. The Canadians fought their way through rubble-covered narrow streets, booby-trapped houses, machine-gun fire, and concealed landmines throughout the town. As the CBC described it, Ortona was a battle in the “courtyard of hell.” The Canadians were successful in the end, but at a cost of 2,200 casualties. Was it worth it? (Shout out to GP Cox for inspiring me to research this battle!) END_OF_DOCUMENT_TOKEN_TO_BE_REPLACED

I know, I know. I’ll show myself out after starting off a blog post with a title like that.

But #MakeAFilmMoreCanadian was trending not too long ago on Twitter. A lot of the tweets were along the lines of The Eh Team, The Great Gretzky, and Pacific Roll Up the Rim. My personal favorite came from the twitter for This Hour Has 22 Minutes. When they posted this tweet…

…I remembered another Hollywood action film that cut out the significant role that Canadians played in the historical event.

I love this movie and won’t be bashing it in this post. However I will be separating fact from fiction and therefore there will be spoilers. If you haven’t seen The Great Escape, stop reading this article and go watch it right now. I will also be discussing the debate over whether historical accuracy in films is even that big of a deal. END_OF_DOCUMENT_TOKEN_TO_BE_REPLACED

Proudly She Marches is an 18-minute documentary film made by the National Film Board of Canada (NFB). Directed by Jane Marsh in 1943 (not 1944 like Youtube is suggesting), it was a part of the Canada Carries On series. The film depicts the many different kinds of work that those apart of the Canadian Women’s Army Corps (CWAC), the Royal Canadian Air Force (RCAF) and the Women’s Royal Canadian Naval Service (WRCNS or “Wrens”) could be involved in. Training, everyday life in uniform, and women’s contribution to Canada’s military during the Second World War are showcased.

Aside from being a documentary, Proudly She Marches was also a propaganda film—so what was its purpose? END_OF_DOCUMENT_TOKEN_TO_BE_REPLACED

Internment: The imprisonment or confinement of people without trial as individuals have not been charged with a crime. Often occurs during wartime or for political reasons and affects large groups of people.

The discussion of wartime internment in Canada is not exactly a popular topic. While I have touched upon the subject of the internment of Eastern European-Canadians in the past, I wanted to revisit the issue and expand upon it by looking at the experience of those interned in Canada during World War II. What were the major similarities and what were the differences? END_OF_DOCUMENT_TOKEN_TO_BE_REPLACED

With the outbreak of World War II in 1939, once again civilian nurses came out in droves to enlist. Unlike the Nursing Sisters who came before them, they were no longer an Canadian Expeditionary force attached to the British army, rather they were fully integrated into the Canadian military. In addition, the nursing service went beyond the Royal Canadian Army Medical Corps. It was expanded to both the Royal Canadian Air Force Medical Branch and the Royal Canadian Naval Medical Service. By the end of the war, 4,480 Canadian Nursing Sisters served in the military, with 3,656 in the army, 481 with the air force, and 343 with the navy. Also aside from regular nurses, therapists, dietitians, laboratory technicians, and physiotherapists were employed by the army as well. END_OF_DOCUMENT_TOKEN_TO_BE_REPLACED

Monday, May 7, 1945 edition of The Evening Telegram (a Toronto newspaper).

Neither Victory in Europe Day nor Victory over Japan Day took place on November 11th. Today’s date belongs to the anniversary of the end of World War I. By the time World War II ended, Armistice Day had been observed by Canada since 1919. It was formally renamed “Remembrance Day” and placed on November 11th back in 1931. For Remembrance Day in 1945, Canadians had much to be grateful for as not one but two chapters of war had come to a close earlier that year. END_OF_DOCUMENT_TOKEN_TO_BE_REPLACED

Hello everyone! Thank you for all the well wishes in my going away post. I had the most wonderful time in both the United Kingdom and Ireland.

Now back to business——The Migrant Crisis (unsurprisingly) dominates European news channels. When I came home, I found that coverage of the crisis had picked up here while I was gone. If you pay attention to the rhetoric of those who are critical of the government’s response to the situation, you will notice that they often use Canadian history to further their argument. These historical citations are always mentioned in passing though and never really discussed. Now there are many, many examples of Canada being both welcoming and unwelcoming to refugees. After all, with a definition like this…

Refugee: A person who has been forced to leave their country in order to escape war, persecution, or natural disaster.

…it should be no surprise that refugees have been coming to Canada for centuries. For the sake of brevity however, this post will focus on Canadian efforts from the Second World War onwards and look at three periods that critics reference with regards to today’s crisis. END_OF_DOCUMENT_TOKEN_TO_BE_REPLACED 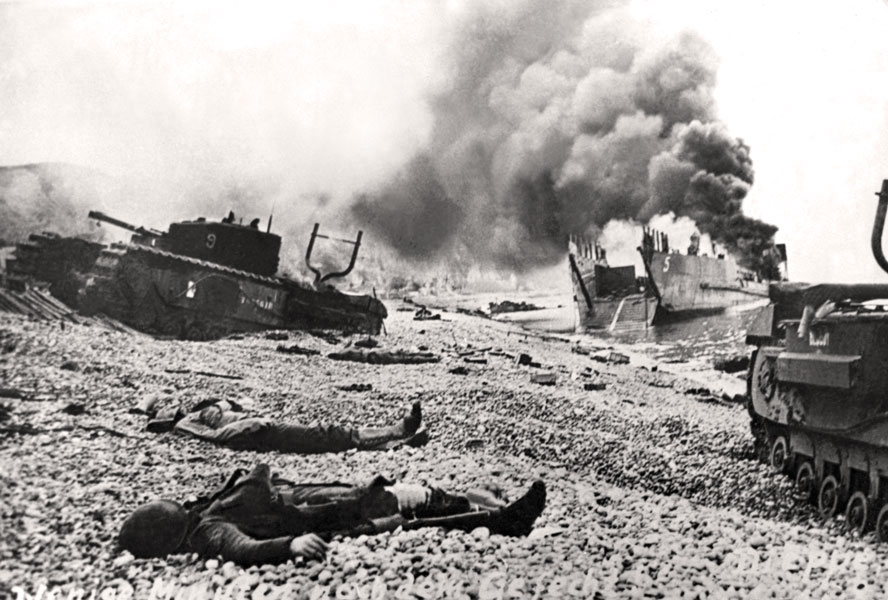 When it comes to Canadian military disasters, it is hard to top the Dieppe Raid. In the early morning hours of August 19, 1942, an Allied attack (4963 Canadians, around 1000 British troops, and 50 United States Army Rangers) took place in the small German port city of Dieppe. It was over before noon. Of the 6000+ men involved, 3367 became casualties. With regards to Canadian troops, 916 were killed, 586 were wounded, and 1946 were taken as prisoners of war.

So what the heck happened? How did things go so poorly, so fast? Did any good come out of the failed raid or was it just a grade A military screw-up? END_OF_DOCUMENT_TOKEN_TO_BE_REPLACED

Sometimes I find news articles or stories that I think would be great to talk about on this blog—except for the fact that they are pretty short and therefore wouldn’t make for much of a blog post in themselves. Solution? I decided to pull a few together. Here are four recent Canadian history-based stories you may have missed:

The Chinese Canadian Artifacts Project
The gold rush is often viewed as the starting point of Chinese-Canadian history, but it actually stretches back to 1788 when the first Chinese immigrants arrived at Nootka Sound on Vancouver Island. These 50 men (who were blacksmiths and carpenters) from Macao and Guangzhou had been recruited by a British fur trader named Captain John Meares.

Skip ahead to 2015, a Vancouver Island-based pilot project to digitize and archive historic artifacts of Chinese communities throughout British Columbia has been announced. The project has three main priorities… END_OF_DOCUMENT_TOKEN_TO_BE_REPLACED