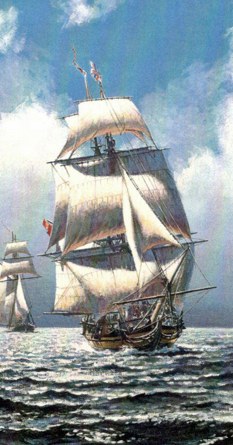 The Welland Historical Museum has a new, interactive shipwreck exhibit about the HMS General Hunter. The British Royal Navy 10-gun brig (built in 1806) played an active role in the War of 1812, including in the capture of Detroit and the pivotal Battle of Lake Erie, where it was captured by the Americans. The General Hunter was used as a US Army transport ship until it was washed ashore in 1816 by a fierce Lake Huron gale. Later, the ex-warship was ransacked and burned. 185 years later, the General Hunter was rediscovered as a shipwreck on the Southampton Beach in Ontario.

Ken Cassavoy was the marine archaeologist who led the excavation and identification process. In addition, he was also heavily involved in designing the museum exhibit that brings the story of the General Hunter to life. I spoke with Cassavoy about the ship’s fighting days, how he went about identifying the shipwreck, and why the exhibit may remind you of an episode of CSI. END_OF_DOCUMENT_TOKEN_TO_BE_REPLACED

Getting back on track with the historical fashion posts, we left off in the 1810s. However before we can look at the clothes Canadians wore during the Regency Era, there is a little matter of the War of 1812. As with any war, uniforms varied greatly on the battlefield to distinguish rank, unit, whether you were part of the infantry, cavalry, or navy, etc. This post will be looking at uniforms worn by British and Canadian soldiers during the 1812-1815 conflict from a general perspective, as well as how military uniforms reflected the overall trends of men’s fashion from that period. (Interested in pictures of American uniforms? Check out these two links).

END_OF_DOCUMENT_TOKEN_TO_BE_REPLACED

Note: This is a two-part look at Pre-Confederation Canada and Napoleon Bonaparte. Part 1 will explore how public opinion regarding the French leader changed overtime. Part 2 will look at Napoleon’s impact on British North America.

From The Adventures of Napoléon Bonaparte. [Source] His many wars had a lot of unforeseen consequences.

Last week we explored how English and French colonists living in Pre-Confederation Canada felt about Napoleon Bonaparte during his reign (1799-1815) as well as how opinions shifted overtime, particularly in Quebec. This week we will be looking at how his impact was not restricted to Europe. Aside from keeping international newspaper journalists and cartoonists busy, the actions of the controversial French dictator had far-reaching, unintentional consequences. How did Napoleon affect British North America during and after his time on the world stage? Are these impacts still felt today? END_OF_DOCUMENT_TOKEN_TO_BE_REPLACED

Note: This is a two-part look at Pre-Confederation Canada and Napoleon Bonaparte. Part 1 will explore how public opinion regarding the French leader changed overtime. Part 2 will look at Napoleon’s impact on British North America.

In the same way Pre-Confederation Canadians had many opinions about the chaos created by the French Revolution, they had a lot to say about the man that put an end to it. From the time Napoleon Bonaparte seized power in France in the 1799 coup d’état to his defeat at the Battle of Waterloo in 1815, his escapades were closely followed and discussed in both English and French Canada. What did early 19th century Canadians think about Napoleon? Did these opinions change overtime and if so, why? END_OF_DOCUMENT_TOKEN_TO_BE_REPLACED

Sometimes I find news articles or stories that I think would be great to talk about on this blog—–except for the fact that they are pretty short and therefore wouldn’t make for much of a blog post by themselves. Solution? I decided to pull a few together. Here are three recent Canadian history-based stories that are worth nothing: END_OF_DOCUMENT_TOKEN_TO_BE_REPLACED

Reenactment of the Battle of Crysler’s Farm.

The dismantling of the St. Lawrence Campaign during the War of 1812 was a two-step process. The first part was the Battle of Châteauguay in Lower Canada. The second part and the subject of today’s post was Crysler’s Farm. On November 11, 1813, John Crysler’s farming fields became the site of the decisive battle that marked the end of the attempt to capture Montreal. Lieutenant-Colonel Joseph Wanton Morrison led the British contingent to an underdog victory, (1,200 vs 4,000), making it similar to its predecessor. Yet when you type “the battle that saved Canada” into Google, Crysler’s Farm shows up. That is quite a big claim to make about a single battle. Does it deserve that title? What makes Crysler’s Farm stand out among all the other important battles that took place throughout Canadian history? END_OF_DOCUMENT_TOKEN_TO_BE_REPLACED

The Battle of Châteauguay by E.H. de Holmfield.

What do you call a battle that had limited casualties but was detrimental to one’s opponent? You’d probably call it one hell of a success and that’s exactly what the Battle of the Châteauguay was. On October 26, 1813, Lieutenant-Colonel De Salaberry managed to repel an American force that was more than double the size of the Canadian force (4000 vs ~1500). This, alongside the soon-to-follow Battle of Crysler’s Farm, spelled the end for the Saint Lawrence Campaign. Although Crysler’s Farm is often called “the battle that saved Canada,” without the events that happened at Châteauguay, it is possible that the later battle may have had a different result. So how did De Salaberry pull it off?  END_OF_DOCUMENT_TOKEN_TO_BE_REPLACED

After a couple of somewhat negative, politically-charged posts I felt it was time for a happier one. As such, here’s the story of Mary Henry; an all-but-forgotten heroine from the War of 1812. There is not a lot of source material on her and sadly the above portrait is the only image we have of her, but Mary’s story is an example of the extraordinary things ordinary citizens do during times of war. END_OF_DOCUMENT_TOKEN_TO_BE_REPLACED

Laura Secord (1775-1868) was a wartime heroine whose story became mythologized and engrained in Canadian history, yet to this day many of the details are still quite murky. Most can recall the basic premise of her story; she overheard an American plot to ambush a British outpost and made a seriously long trek through the woods to warn them of the impending surprise attack. But specific aspects about her journey have suffered from misinformation over the past two centuries. Who was Laura and how did she hear about the plot? How long was the walk? Was she alone? Did she bring a cow with her to trick American soldiers? Or did she trick them with chocolates? Did she really do it barefoot? Did her trek even matter? What happened to her after the war? Considering that June 22-24 is the anniversary of Laura’s 1813 trek and the Battle of Beaver Dams, now is the perfect time to clear things up and get some answers to those questions. END_OF_DOCUMENT_TOKEN_TO_BE_REPLACED

The Battle of Stoney Creek by Peter Rindlisbacher

Did you know the War of 1812 ended 200 years ago last week? (The war officially lasted from June 18, 1812 to February 18, 1815). I’m going to go with “no” because often it gets reduced to a footnote in history classrooms. That’s been my experience, at least. My American history professor spent more time discussing what led to the conflict as opposed to the actual war itself. Mind you, this was better than my grade 10 history teacher who flat out said, “Nothing happened.” Um…

Now, I know status quo ante bellum, aka borders were reverted to pre-war status, isn’t a very sexy ending to a war. However, people seem to forget that just because the borders didn’t change, that doesn’t mean everything stayed the same. Here’s why the war still matters: END_OF_DOCUMENT_TOKEN_TO_BE_REPLACED