It is hard to pinpoint when tourism began in Canada. Some consider European explorers of the 16th century to be the first Canadian tourists. Others argue it was the creation of the Canadian Pacific Railway in the 19th century that really got things rolling because with modernization came with the development of cars and airplanes.

The postwar era was a peak time for Canadian tourism. From 1945-1960, most tourists preferred to travel to a handful of developed countries; the top 15 destinations received 97% of international tourists. In 1950, after the United States, Canada was the second most popular place to visit. Contrast that today with those same 15 destinations receiving only 55% of tourists and as of 2014 Canada has dropped to 18th on the list.

Travel ads during this time had the general look of postwar era advertising. Poster and magazine design had become an art form and drew heavily from the modernism and art deco movements. Artists utilized rich colours and bold geometric shapes to catch the attention of prospective tourists. As a result, many vintage Canadian travel ads all have a similar look: bright, eye-catching paintings, big, happy faces, occasionally a lot of descriptive text. There are some other similarities as well. See if you can spot them by clicking on the images below. END_OF_DOCUMENT_TOKEN_TO_BE_REPLACED

Shaman and Disciples by Norval Morrisseau (1979).

When discussing Indigenous art in Canada, it will not take very long before the name Norval Morrisseau comes up. By the time he passed away in 2007 at the age of 76, Morrisseau had obtained titles like “Picasso of the North,” international acclaim, he inspired countless of artists over the years, and today his artwork hangs in major galleries across the country. His art was truly original, though often paradoxical at times; as was the man himself. END_OF_DOCUMENT_TOKEN_TO_BE_REPLACED 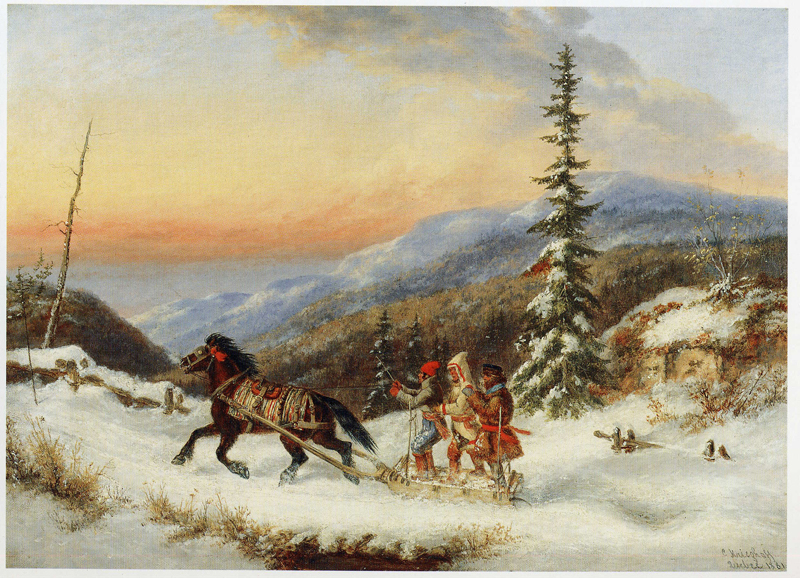 Habitants on a Trip to Town by Cornelius Krieghoff (c. 1861)

If you have ever been to any major art gallery in Canada, you have probably seen at least one of Cornelius Krieghoff’s paintings. A Dutch-Canadian painter, he captured mid-19th century life and the rural Canadian landscape in a way that still resonates today. His work was heavily inspired by habitants (French-Canadian peasants/farmers), the great outdoors, as well as Indigenous communities and their way of life. Krieghoff’s work went on to influence future artists and yet some critics question whether he can be considered a real Canadian painter. Before we get to that though, let’s take a look at his life and Lower Canada/Quebec in the mid-1800s. END_OF_DOCUMENT_TOKEN_TO_BE_REPLACED

Far from being a staple of the modern era, negative campaigning and politics have always gone hand-in-hand. When it comes to campaign ads designed to attack political opponents, that has a long history as well. Archaeologists who excavated the ruins of Pompeii discovered ads defaming political candidates on ash-covered walls. Needless to say, Canada also has a tradition of political mudslinging stemming all the way back to the days of Sir. John A Macdonald. Nowadays when we think of negative campaigning/advertising, television attack ads probably come first to mind. Before we even touch on those sorts of ads though, let’s wind the clock back a bit first. This post will take a look at some historical federal campaign posters from the context of the time they were produced. END_OF_DOCUMENT_TOKEN_TO_BE_REPLACED

What would you say about a mystery that involves a man whose cause of death is not only unknown, but there is also confusion over where his body is actually buried? Most would call that one hell of a botched investigation. Others might call it the tragedy that surrounds Tom Thomson.

Over the course of his short thirty-nine years, Thomson became one of Canada’s most influential painters. His work not only inspired the Group of Seven but changed how the Canadian landscape was viewed. Nevertheless, 98 years after Thomson’s untimely death many questions still remain. Was it murder? Was it suicide? Or was it merely an accident? END_OF_DOCUMENT_TOKEN_TO_BE_REPLACED

There are a number of types of propaganda, but for this post I will be only looking at examples from Canada during World War I. The purpose of propaganda is to influence or manipulate the actions, thoughts, and/or beliefs of a population towards a particular cause. Intended to further the agenda of a person or group, the information presented is selective (sometimes even skewed) in order to produce an emotional reaction.

Propaganda generally carries a negative connotation as it is commonly associated with Hitler and the Third Reich. However, the term and its usage has been around long before both world wars. According to ancient world historians, the oldest example of propaganda comes from the Persian Empire in 515 BC!

Please click on the pictures below to learn more about the tactics, themes, motifs, and history behind Canadian WW1 propaganda.

Loosely based off of the far less judgemental looking Uncle Sam poster/Britain’s 1914 Lord Kitchener poster, the Canadian government decided to create their own version given the success of the two aforementioned posters. 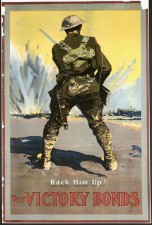 For those who were unable to go overseas, buying victory bonds was a way to support the war effort. 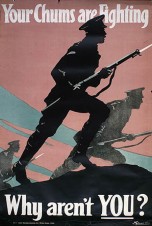 To get the not-so-eager to enlist, recruitment offices had a number of tactics including guilt, peer pressure…

…questioning one’s character and masculinity. These kind of posters also help to instill negative attitudes in the general public towards men who chose not to fight.

Following the initial first waves of volunteers, recruitment became harder and harder until conscription became a reality in 1917.

Women were targeted in wartime propaganda too. This is one of the few examples regarding women working. Most posters about women were not about them physically joining the war effort. 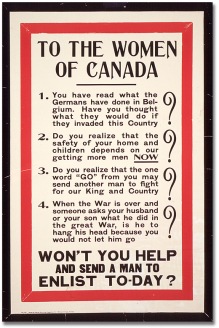 Rather, women-geared propaganda was largely about men, either getting them to enlist…

…or performing “housewife duties” for the benefit of men such as food rationing.

Another example from the Canada Food Board.

The image of families was popular in WW1 propaganda. Behind the mother is a Canadian Patriotic Fund office, which was an organization that raised money to support soldiers’ families.

If women weren’t housewives or mothers in wartime posters, usually they were victims instead. Images of murdered, beautiful women were popular as they were meant to stir up anger and hopefully get men to enlist. French-Canadians were the least likely to enlist, so over-dramatic and rhetoric heavy posters were common in Quebec.

If an innocent, dead woman wasn’t enough to piss people off, propaganda makers generally threw a dead baby in there as well.

Not sure who the government was targeting with this poster unless beavers could purchase war bonds as well.

I don’t even know what to say about this one.

Excluding the previous poster, I actually had a hard time finding racist/jingoistic examples from WW1 that were made in Canada. WW2 is where everyone really stepped it up. Most of the anti-German posters were about presenting their war tactics as cruel and evil, as opposed to reducing the population to negative stereotypes.

In between the 23 films that will be coming out over the next four years and TV shows such as Marvel’s Agents of S.H.I.E.L.D, Gotham, Arrow, and The Flash, the superhero overkill bandwagon doesn’t look like it is going to be stopping anytime soon. Given Canada’s history of superheroes, will a Canadian hero or heroine soon be getting a ride on that wagon?

END_OF_DOCUMENT_TOKEN_TO_BE_REPLACED

However, the academic side of me wants a more fleshed out answer—one that is not based on personal taste. The Group of Seven were certainly not the first Canadian painters, nor were they the first vocal nationalists. With this in mind, why are the Group of Seven so iconic in Canadian art? END_OF_DOCUMENT_TOKEN_TO_BE_REPLACED