Expulsion of the Acadians by Lewis Parker (c. 2011)

The Acadian Expulsion (1755–1764) was the forced deportation of the citizens of Acadia (an area that was spread out across modern day Nova Scotia, New Brunswick, and Prince Edward Island) by British soldiers. Although it was part of the British military campaign against France during the Seven Years’ War, the expulsion was the result of long-term hostility between the two sides. Approximately 10,000-11,500 Acadian refugees fled to Louisiana, New France, the English colonies, and some went as far as Europe or the Caribbean. Thousands died of starvation, disease, or from drowning and those who survived weren’t exactly welcomed with open arms.

So how exactly did British colonial government justify their actions? This post looks at the different positions on the Expulsion from both the British and Acadian points of view.

Carte De L’Acadie Contenant by Jean-Baptiste-Louis Franquelin (1702). [Source] Please click on the image for a better resolution. To learn about the map, click here!

Acadia’s history stretched all the way back to when the French first arrived in the area in 1604. French settlers began to fill the rich farmland and overtime began to develop their own distinct culture due to the influence of the Mi’kmaq Nation and their isolation from France. Over the course of the 17th and 18th centuries, Acadia became a site of great turmoil as it not only endured six colonial wars but control over Acadia shifted back and forth between the French and the British.

1713 was a pivotal year. Although the Acadians were allowed to keep their land, the end of the War of Spanish Succession and the Treaty of Utretcht brought Acadia under British rule. The Acadians refused to pledge their allegiance to the British, instead they signed an oath of loyalty in 1727 on the basis of neutrality. They would remain neutral so long as they did not have take up arms against the French or the Mi’kmaq. British officials begrudgingly accepted the compromise. At the time, they lacked the military means in the region to force the Acadians to pledge allegiance. This agreement lasted for about three decades. However, when the Seven Years’ War broke out in the Ohio River Valley in 1754, the uneasy neutrality between the two sides became impossible to maintain.

Safety of the British Colonists – As the war inched closer and closer to Acadia, Charles Lawrence, the British Lieutenant Governor in Halifax, began to view the Acadians  as a security risk. The British colonists living in the area would not be safe as long as they were surrounded by thousands of people who were technically the enemy, despite their claims of neutrality.

Neutrality? What Neutrality? – In the minds of Governor Lawrence and other British colonists, the Acadians had never been neutral. Aside from their ongoing relations with the Mi’kmaq, who were enemies of the British, some Acadians had been involved in Father Le Loutre’s War (1749–1755). This conflict involved guerrilla warfare against British colonists in Acadia and New England, courtesy of a militia of Mi’kmaq and Acadians, led by Father Jean-Louis Le Loutre. The illegal establishment of Halifax in 1749 (it violated a 1726 treaty with the Mi’kmaq), the militia undertook numerous raids against British towns and cities. The war saw population movements, the militarization of the area (many forts were built), and a total of 24 recorded battles and/or raids occurred. 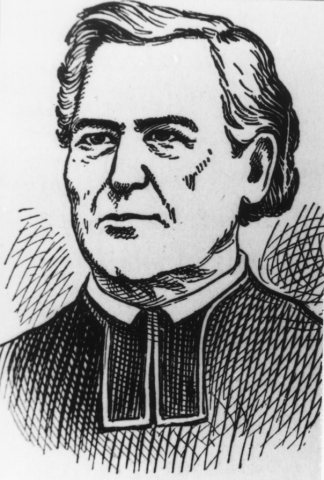 Father Jean-Louis Le Loutre, the Catholic missionary turned military leader. After Fort Beauséjour, he tried to escape back to France but the British seized his ship. He was imprisoned until the end of the Seven Years’ War and then spent the rest of his life trying to help displaced Acadians.

Lack of Gratitude – The British had been exceedingly tolerant for decades. Despite the fact that they had been conquered, the Acadians had been allowed to keep their land, faith, language, and pretty much live as though the British weren’t in control. The British had put up with their pledge of neutrality and did not force the Acadians to take up arms against the Mi’kmaq. Instead of gratitude, the Acadians responded to British kindness with hostility and bloodshed.

Fort Beauséjour – This battle ended Father Le Loutre’s War and brought Acadia into the Seven Years’ War. The British military campaign in this area had two goals: capture Fort Beauséjour and Fort Louisbourg. They achieved their first goal on June 16, 1755. Despite the British victory, Governor Lawrence was furious when he discovered that during the battle around 200 Acadians had been found inside a French fort. That was the last straw.

Oath of Allegiance 2.0 – Governor Lawrence created a new oath of allegiance for the Acadians. Either sign it and swear full loyalty to the British crown or you and your family would be kicked out of the colony. The vast majority of Acadians refused and Governor Lawrence was left with no choice but to order their deportation. The first round began in August of 1755.

Back and Forth Governance – As previously mentioned Acadia’s existence had been one of constant warfare, often as a result of being caught between the British and the French. Control over the colony went back and forth between the two and so the Acadians felt that neutrality was the best policy. Why make promises and claim allegiance to one side when one day control might suddenly shift to the opposite side?

Neutrality Pledge – Despite the fact that some Acadians took up arms against the British in Father Le Loutre’s War, most of the population did not. Most upheld their oath of loyalty that they had signed in 1727. The second oath and the deportation violated the original agreement between the two sides. Also, how is it fair that the actions of a few lead to the punishment of thousands of innocent civilians?

Fear of Retaliation – How could the Acadians sign the second oath? To swear allegiance to the British would make them enemies of the French and possibly the Mi’kmaq. British soldiers would defend British colonists in the event of an attack, but the Acadians? They would get massacred. They would be putting their lives greatly at risk by signing the second oath. They had to refuse and continue to insist upon neutrality.

Their Side of the Story at Fort Beauséjour – Reportedly the only reason the 200 Acadians were at that French fort is because they had been forced to go there. The French and Mi’kmaq had been burning down Acadian villages and capturing Acadians to hurt the British. To them, Acadian neutrality meant they were on the side of the British and their men and crops could potentially support the British troops. As such, the presence of 200 Acadians inside the fort was not the act of betrayal that Governor Lawrence thought it was.

Destruction, Not Deportation – Governor Lawrence went too far with how the deportation took place. (For example at the beginning the Acadians were surrounded when they were at church and forced by bayonet-holding British soldiers to get onto ships. They couldn’t bring any of their belongings). Their homes and crops were burned. Families were torn apart when they were set to different places. Sometimes when Acadian families arrived in British colonies, their children were taken from them. Those who fought back were killed. Governor Lawrence’s intention wasn’t to defend his territory, he wanted to destroy the Acadians as a people and give their land to British newcomers. He never wanted them to return.

“Destinations and movements of the deportees during the Acadian Expulsion.” [Source] Sometimes their original destinations did not work out, either due to hostility or there simply was no land for them. As a result many were unable to settle and wound up destitute. Others were luckier. Small numbers of Acadians were allowed to return to the British colonies following the end of the Seven Years’ War. (Governor Lawrence was dead by this time).

(Due to possible presentism issues, this gets its own section). The question of human rights and the right to a homeland sometimes arises when discussing the Acadian Expulsion. Some argue that it is unfair to throw the issue of rights into the mix. These are concepts that the British would have not been aware of at this time as the Acadian Expulsion happened before both the American and French Revolutions. However, others argue that uprooting thousands of people, destroying their families and lives, and forcing them to live as refugees have always been obviously wrong. The wrongness of these actions are basic and enduring; it doesn’t matter what century the Acadian Expulsion happened in. Mass deportation was an extreme solution and the fact that the British held off on it for so long reveals both a reluctance and an awareness of the severity of their actions. The British knew it was wrong and therefore their actions have never been justifiable.

What do you think? Was Governor Lawrence justified in his deportation order or was the Acadian Expulsion wholly unjust? Is it okay to discuss human rights in relation to the deportation or is it too modern of a concept?

Note: I want to thank everyone who have shared their thoughts and stories regarding the Acadian Expulsion. As this is an old article, I will be turning off comments.

Faragher, John M., A Great and Noble Scheme: The Tragic Story of the Expulsion of the French Acadians from Their American Homeland. New York: WW Norton & Company. 2006.

Marsh, James. “The Deportation of the Acadians.” The Canadian Encyclopedia. (2013). Accessed from: http://www.thecanadianencyclopedia.ca/en/article/the-deportation-of-the-acadians-feature/.

28 thoughts on “Was the Acadian Expulsion Justified?”