The Second Boer War (1899-1902), often simply referred to as the Boer War, was fought in the areas that would later become South Africa and Swaziland. The war saw the British Empire on one side and both the Boers of the Transvaal (the South African Republic) and Orange Free State on the other. Like the First Boer War (1880-1881), imperialism was at the heart of the conflict. However this time around, Britain won and they went on to annex both republics. As part of the British Empire both Canada and Newfoundland were involved. So how much of a role did Canada play in the Boer War? How did the general public view the conflict? Finally, why is it that most of us today have little-to-no knowledge of our involvement in the war?

Also known as the Afrikaners, the Boers were the descendants of the original Dutch, French, and German colonizers of southern Africa. During the Napoleonic Wars, Britain came down and defeated the colonists at the Battle of Blaauwberg in 1806 and formally took over in 1814. The Boers were not happy with the Anglicization of their colony nor Britain’s anti-slavery policies. As a result the Great Trek occurred; many Boers left and formed two new republics, the Transvaal and the Orange Free State. Everything was fine until diamonds and gold were discovered in the two republics in 1867. Nothing regenerates old hostilities quite like greed.

Britain’s official reason for the war was that they needed to put a stop to Boers who were denying political rights to the growing number of British immigrants who worked in the Transvaal gold mines. When the war broke out and Britain asked its colonies to assist them, most English Canadians wanted Prime Minister Wilfrid Laurier to immediately organize and dispatch an official contingent. They were surprised to be met with resistance. Laurier was reluctant and Parliament was split on the matter. In the eyes of supporters, the war was one of moral righteousness and civilization versus backward values. How could anyone not support such a cause?

French Canadians and recent immigrants had a simple response: Not our war; not our problem. Why should Canadians sacrifice their lives for a foreign war that would have no effect on Canada whatsoever? Why should the government spend tons of money on a conflict taking place thousands of miles away? The most outspoken critic of Canada’s involvement was Henri Bourassa. The leading voice of French Canadian nationalism during the early 20th century, Bourassa saw imperialism as evil and was concerned by the rise in pro-Empire enthusiasm in both the Canadian government and general public. Many Francophones felt it threatened their sovereignty and as such many were sympathetic to the Boers’ plight. French Canadian opposition to the Boer War did not waver throughout the duration of the conflict.

Fun Fact: Although this occasion marked our first official overseas war, Canadians had fought abroad before. However these were individual enlistments and were not part of a dispatch by the government.

A political cartoon from Le Pionnier, a Montreal newspaper. It depicts British Colonial Secretary Joseph Chamberlain as an octopus draining Britain’s colonies of their resources. (1902).

With half of the country for the war and the other half against, Prime Minister Laurier was caught in the middle. So he did what he always tried to do, he settled for a compromise. Canada did not have a professional army at the time. Rather than creating one to send abroad, Laurier agreed to recruit and send over 1,000 volunteers. To minimize costs, Britain would be footing the bill once the volunteers were in Africa. Those who were staunchly against the war were not too happy. Laurier’s compromise was met with a 3 day riot in Montreal. Bourassa called Laurier a “sell out.” Meanwhile, eager English Canadian men went to their nearest recruitment station to sign themselves up.

A political cartoon depicting Laurier sacrificing Canada for imperialism. Former Prime Minister and Leader of the Opposition at the time, Sir  Charles Tupper, is coming to the rescue. (c. 1900). [Source]

Laurier had no trouble rounding up 1,000 volunteers. The early recruits left for Africa in October 1899 believed they would be victorious by Christmas and back home in the early new year. After all, how could two tiny colonies stand up to the greatest military strength on earth? Two words: guerilla warfare. Like the Americans during the War of Independence, the Boers utilized various guerilla tactics, (ambush and retreat, highly mobile soldiers, raids, destroying communication lines, etc), to overwhelm the British army. When the Canadians arrived in November they were pretty shocked to find themselves on the losing side. To top it off, Black Week happened less than a month later. Britain suffered three major defeats and all thoughts of celebrating victory on Christmas morning vanished.

Of course, the Brits did not stay down for long. In February 1900, things started to turn around. The Commonwealth army was under new leadership and it was this phase of the war that Canadians saw the most combat. The most of the first 1,000 that came over were involved in the Battle of Paardeberg. For nine days, the Boers held strong, but in the end they surrendered to the Canadian contingent and it marked the first significant British victory of the war. More victories would follow.

It should be noted though that part of the reason that the tides turned is that Britain put a stop to the aid that the Boers were receiving from sympathetic locals. How? Boer and Southern African homes were burned to the ground, farmlands were destroyed, and wells were poisoned as a result of their Scorched Earth policy. Furthermore thousands, namely women and children, were sent off to concentration camps. This was not the first usage of internment during wartime, but it was the first time that whole regions were depopulated and a specific nation was targeted. Thousands of internees died from disease. These policies played a key role in the eventual defeat of the Boers. 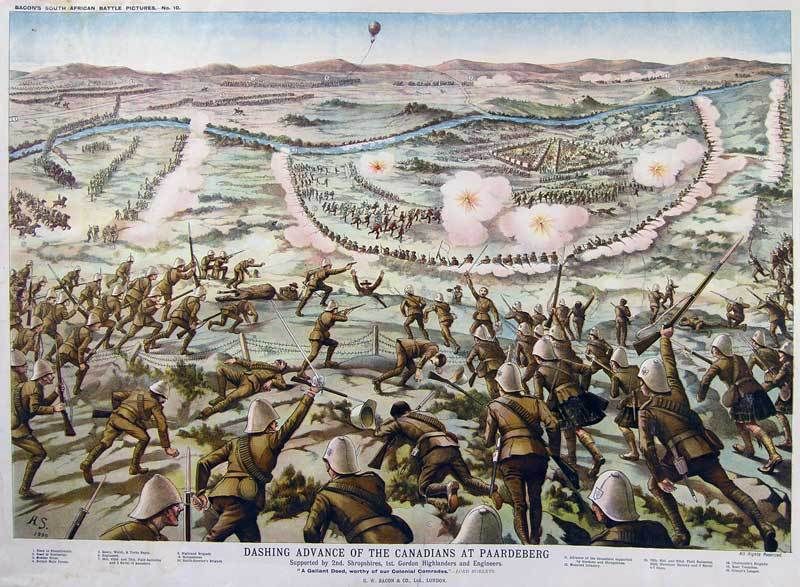 Dashing Advance of the Canadians at Paardeberg by G.W. Bacon and Co. (1900).

Canadians back at home followed the war closely. Victories were a source of immense pride for English Canadians; many saw this as Canada’s first step out onto the world stage. Successes were met with parades and volunteers continued to pour in. In the end, over 7,000 Canadians served overseas. Also, a fund was started for families who had lost a family member as a result of the war. Negative news, like how most fatalities were not combat-related but rather due to diseases like malaria, as well as the details about the concentration camps did not overwhelmingly sway public opinion. There was criticism regarding some of the decisions that Britain made, but like their French counterparts, English Canadians’ view of the war did not change. They supported the military effort to the end.

Laurier’s compromise paid off. The Liberals won a second majority government, defeating Tupper and the Conservatives in the 1900 general election. Despite French Canadian opposition to the war, the Liberals won most of the seats in Quebec. Although Laurier managed to minimize spending, his government spent around $3 million, (the equivalent of $63 million today when adjusted for inflation), on the war effort. As for the death toll, 267 soldiers are listed in the Book of Remembrance in Ottawa.

If you have been reading all of this and thinking to yourself, “this kind of sounds a bit like World War I,” you are right. The Boer War was a bit of a dress rehearsal for the subsequent global conflict that would engulf Canada and the world just over a decade later. Why? Issues brought to the forefront because of the Boer War, (English-French division, the role of Canada in foreign wars, militaristic arrogance), were not resolved. As such with the outbreak of WWI, a lot of the same arguments and attitudes came out. Debates about loyalty to the Empire and French Canadian nationalism resurfaced. Laurier and Bourassa were at it again, only this time you had Prime Minister Robert Borden thrown into the mix. Even at the end of WWI, these issues remained unresolved.

Given that the English-French division was not really the result of the Boer War, the most significant outcome of the conflict in Canada was the increased sense of national pride and confidence on the world stage. Canadians soldiers were seen by both ourselves and others to have done quite well in the war.  The government was convinced it was time to finally form a professional army for Canada. Finally, no doubt this confidence underscored some of the enthusiasm surrounding enlistment when WWI broke out.

Return of the Canadian Contingent from South Africa. (c. 1900) [Source]

So what happened to the collective memory of the Boer War in Canada? Where did all that national pride go? The easy answer is that WWI eclipses the Boer War. Why talk about an isolated war in southern Africa when you can talk about the global conflict that had a major effect on Canada? Another reason is that the Boer War is widely seen as just another British war of the Victorian Era. Yes, 7,000 Canadians is a large number, but it seems small compared to the whopping 450,000 Brits who fought. The final reason is that when it comes to this war, we are technically the “bad guys.” We were colonial cronies backing up an imperialistic aggressor who utilized concentration camps and a Scotched Earth policy to get the job done. Why mention all that when you can instead talk about WWI instead where we were the “good guys?” The negative image that the Boer War is why the plans to celebrate the 110th anniversary were skirted. Now, I do not have a problem with its negative image. I just think our involvement, as well as the negative parts of the war deserve more than a passing reference or two in Canadian history textbooks, don’t you?

6 thoughts on “Canada and the Boer War”