Did you check out the latest Heritage Minute? Although Nursing Sisters focuses on two nurses in particular, Eleanor Thompson and Eden Pringle, it is a commemoration of the hard work and sacrifice of over 2500 Canadian women who served as nurses during the First World War. As always with Heritage Minutes though, they only have well, a minute, to tell their story. Naturally some details get lost although the way. So let’s take a closer look at Thompson, Pringle, and Canada’s WWI nurses at large.

3141 Canadian women in total volunteered to serve as nursing sisters in the Royal Canadian Army Medical Corps for WWI. Of those, 2504 served overseas in England, France, Gallipoli, Alexandria, and Salonika. Women working as nurses was not a new thing by this point, women had been a part of the Canadian Army Medical Corps since the 1885 Northwest Rebellion and they served during the Boer War. When the opportunity to join the Great War as a nursing sister first came available in 1915, there were reportedly 2,000 applicants for just 75 positions. These women were required to be trained nurses before the war and they earned $4.10 a day. Canada’s nurses were between the ages of 21 and 38 and most were single.

Nursing sisters and patients outside a ward tent, No. 2 Canadian General Hospital, Le Tréport, France. (I love how the dog also has a pipe in its mouth).

Nursing sisters worked near the front-lines, tending to wounded soldiers as they arrived by truck or rail. They cleaned wounds, bandaged and re-bandaged, assisted during and after surgery, and monitored patients’ health. The latter was one of their most important jobs; to ensure that soldiers did not die from subsequent infections, particularly gangrene, as a result of their initial wounds.

So why “Nursing Sisters” not “Nurses?” The only reason women were allowed to become nurses in the first place is because the role became attached to ideas involving religion and the “natural” role of women as caregivers over the course of the 19th century. Prior, it was deemed unacceptable for women to be involved in nursing, let alone anywhere near a battlefield. As such, you will notice that the position and uniforms of Canada’s nursing sisters holds heavy religious connotations. Furthermore, “Sisters of Mercy” and “Angels of Mercy” were nicknames given to the nurses due to the fact they resembled nuns and/or angels. Their dress however was blue, which led to the soldiers also calling them “Bluebirds.”

Of those who served overseas, 53 never made it home. Some died under enemy fire such as air raids and 14 lost their lives when a German U-boat torpedoed the Llandovery Castle, a hospital ship. Others died of diseases like dysentery and pneumonia.

A group of Nursing Sisters pose together. 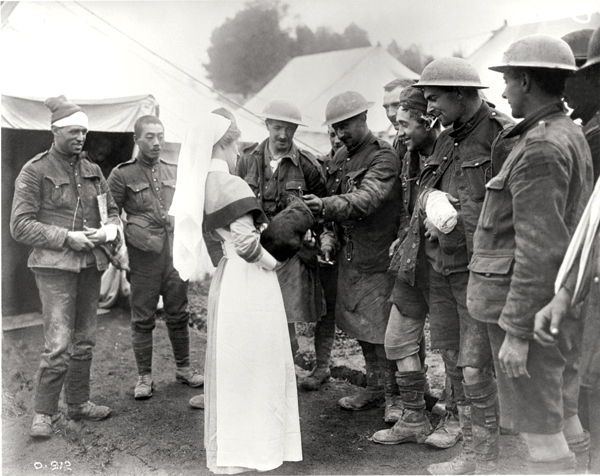 After being treated for wounds, soldiers present a nurse with a dog they found in the trenches, October 1916. Best gift, y/y?

Now back to the two nurses in video. Unfortunately, information and pictures of the two nurses that are the focus of the Heritage Minute are scarce. (If anyone knows of a picture, please feel free to share a link in the comments!)

Eleanor Thompson was born in Valleyfield, Quebec on December 2, 1888. She enlisted in 1915 with the Canadian Army Medical Corps while living in Montreal. Thomspon was one the nine Canadian WWI nursing sisters awarded the Military Medal, for “gallantry and devotion to duty during an enemy air raid.” She was caught in the attack on No.3 Canadian General Hospital at Doullens, France, and was buried underneath debris. When Thompson managed to pull herself out, she and Sister Meta Hodge (who had also been trapped by rubble) disregarded their injuries and managed to extinguish overturned oil stoves before the flames spread to patients’ beds. They then tended to the injured and organized the removal of trapped patients.

Unfortunately a few days after the attack, Eleanor began to suffer from “neurasthenia” (what would now be classified as post-traumatic stress disorder). She suffered from severe headaches, insomnia, and a fear of loud noises. Ultimately, Thompson was discharged in June 1919 for “Nervous Debility.” Supposedly, she traveled down to her father’s farm in Massachusetts in the hopes of recovering. We don’t know what happened after that though; there is no further documentation on her life. 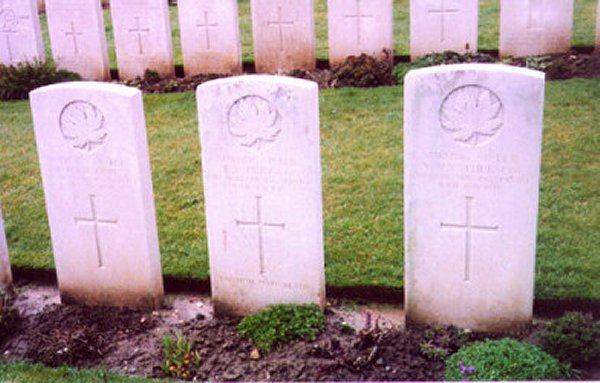 Eden Pringle was born on September 4, 1893 in Glasgow, Scotland. her family moved to Vancouver and she enlisted with Canadian Army Medical Corps in 1917. Despite the fact that the Canadian hospital was distinguished by red crosses and not located near military installations, it was still attacked. The air raid occurred on May 29, 1918, shortly after midnight.  Although the attack was done by a single German aircraft, it still left 32 staff and patients dead and 17 wounded. Pringle had been assisting at the operating table at the time of the raid. Everyone in that room was killed. Pringle, age 23, was the youngest Canadian nurse to die during the war. She is buried in Bagneux British Cemetery, in Somme, France.

Canadian nurses working among the ruins of No. 1 Canadian General Hospital. June 1918.

Impact of the Nursing Sisters

Nursing Sisters, doctors, orderlies, and a patient take a very serious photo before an operation.

It is interesting to note that Canadian nurses where the only nurses within the Allied armies who held the rank of officers. This rank is why Canadian officers were adamant that heroic Canadian nurses like Eleanor Thompson were commemorated for their valour. There was a strong push back from British officials who initially refused to award Canadian nurses any honors because they were women. In regards to the general public, although no one was really surprised that women would be sympathetic towards the war effort, the fact that they contributed in such a physical manner was baffling. Nothing pissed off the public like a nurse getting killed so the nursing sisters wound up being propaganda fodder.

This Canadian WW1 propaganda posters references the Llandovery Castle tragedy (where over 200 soldiers and 14 nurses lost their lives when a German U-Boat torpedoed the hospital ship) in an effort to raise more money for the war effort.

On the flip side, the work that these nurses (and all Canadian women involved) had put towards the war effort sparked the discussion of the creation of the Canadian Women’s Army Corps. The motion was approved in September 1918, but then the war ended, and the idea was shelved until 1941. Nevertheless, when World War II came around once again thousands came out to enlist and serve in the war effort.