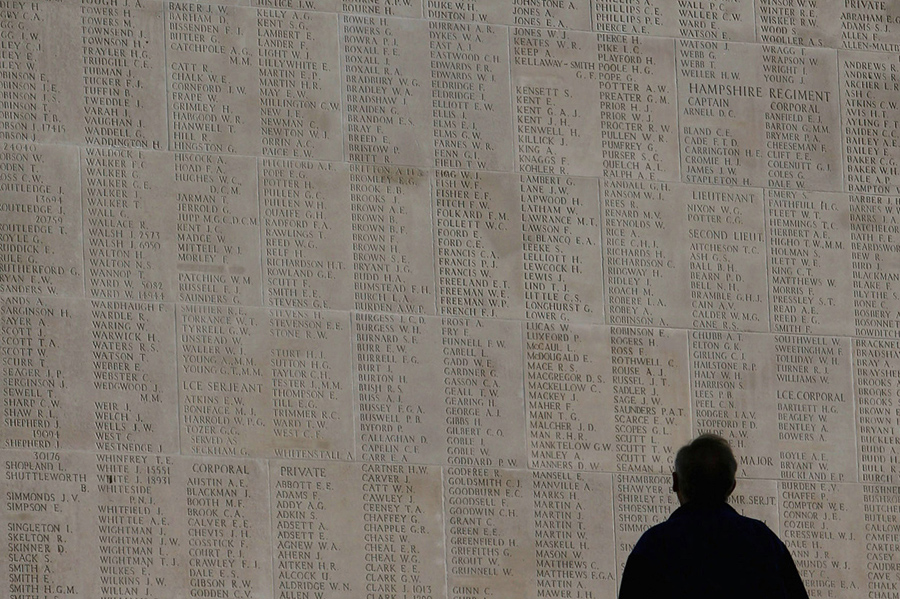 A man stands before the Thiepval Memorial to the Missing of the Somme in Arras, France. [Source]

November 11th, 2018 at 11:00am marks the 100th anniversary of the end of the First World War. Beginning on July 28, 1914, “the war of end all wars” eventually spread to the far corners of the earth, embroiling much of the world in–still to this day–one of the deadliest conflict in history.

To put those numbers in prospective, Canada’s population was around 8,000,000 at the time. With all this in mind, this post is meant to honour not just the Canadians who served, but all those across the world who died. Below the cut are some photos that not only show what places looked like back then in comparison to today, but the lasting scars and how landscapes were altered. For more then and now photos, please check out the listed sources. END_OF_DOCUMENT_TOKEN_TO_BE_REPLACED

The Welland Historical Museum has a new, interactive shipwreck exhibit about the HMS General Hunter. The British Royal Navy 10-gun brig (built in 1806) played an active role in the War of 1812, including in the capture of Detroit and the pivotal Battle of Lake Erie, where it was captured by the Americans. The General Hunter was used as a US Army transport ship until it was washed ashore in 1816 by a fierce Lake Huron gale. Later, the ex-warship was ransacked and burned. 185 years later, the General Hunter was rediscovered as a shipwreck on the Southampton Beach in Ontario.

Ken Cassavoy was the marine archaeologist who led the excavation and identification process. In addition, he was also heavily involved in designing the museum exhibit that brings the story of the General Hunter to life. I spoke with Cassavoy about the ship’s fighting days, how he went about identifying the shipwreck, and why the exhibit may remind you of an episode of CSI. END_OF_DOCUMENT_TOKEN_TO_BE_REPLACED

*Blows dust off Cartography series.* It has been a while since I talked about maps so today we’re looking at Buache’s 1754 map. If you are totally confused by it, trust me  you’re not alone. He had a habit of drawing interesting maps. Similar to the Arthur Dobbs and Joseph La France 1744 map, A New Map of Part of North America, it is best described as a stab in the dark at what Western Canada looked in.

Born in 1700 in Neuville-en-Pont, France, Philippe Buache originally studied architecture, but Guilleaume Delisle (who I featured earlier on), took him under his wing and trained him in cartography. Buache actually married Delisle’s daughter. Although he went on to become the official cartographer and geographer for the French king Louis XV and joined the Academy of Sciences in 1730, historian George Kish contends that Buache is largely forgotten today. Overshadowed by his father-in-law and his successor, d’Anville, Kish argued this is a shame because Buache was a pioneer in thematic physical maps.

Fun Fact: This image that Google likes to show is not Philippe Buache, but rather his nephew, Jean Nicolas Buache, who was also the premier géographe du Roi.

In the mid-18th century, the area west of Lake Superior was relatively unknown to Europeans. There were two competing theories about the geography of Western Canada at the time and this map was an attempt to show both. As such, the map above is actually a two-in-one. The top is the east-west river flow as reported and mapped out by Ouchagah, a Cree man, for La Vérendrye, a French Canadian military officer, fur trader, and explorer. The bottom is supposed to be the northwest-southeast flow and a look at the possible geographic terrain. Despite the confusing nature of this map, not all of Buache’s geographic speculations were wrong. If you look at the second, bottom map you can see Buache has drawn both Alaska and the Bering Strait. Nevertheless, these two clashing maps illustrate the difficulty Europeans had in theorizing the shape and scope of Western Canada.

Return to Vimy, Denis McCready, provided by the National Film Board of Canada. “This is the first time the NFB has colourized its own archives for a film project, shedding unprecedented light on the Canadian Expeditionary Force (CEF) film collection.”

Sick of hearing about Vimy Ridge? Too bad! I found this great nine minute film that can help teachers who want to bring World War I to life for their students.

The story follows a Canadian woman who visits the Vimy Memorial to make a charcoal imprint of the engraved name of her great-grandfather who died during the battle. She has his notebook which is full of sketches and diary entries that he made during months of preparation for Vimy Ridge. These sketches turn into colourized archive footage and enables us to witness the daily lives of the soldiers of the Canadian Corps and watch the detailed preparations that went to this battle. WW1 battle footage is shown, maps are used to support explanations, you see Sir Arthur Currie walking around/making plans, the Nursing Sisters pop up—seriously this short film has everything.

Looking for more Vimy Ridge resources? Check out my whole page dedicated to the battle.

As men’s fashion moved to a more simple tailored style over the Regency era, losing the frills and certain colours along the way, women’s fashion did the opposite. It went from understated and sleek to poofy sleeves, bell-shaped skirts, elaborate hats, and ribbons galore. Corsets and multiple petticoats returned full-swing. It would take a little under a century before less constricting styles became popular again. Why the sudden change (or reversal, really) for women’s clothing? END_OF_DOCUMENT_TOKEN_TO_BE_REPLACED

When it comes to timelines and the Regency Era, things get a little messy. Technically the era only lasts nine years. When “mad” King George III was declared unfit to rule, the Regency Act was passed and his son George, the Prince Regent, ruled in his place. When George the III died in 1820, the Regent became King George IV. However, there is a certain “romantic feel” to the Regency Era that goes beyond that short time frame and most slap on another decade or so when establishing a timeline. (1837 is the farthest the Regency Era extends on both sides of the Atlantic however, given that’s when Queen Victoria’s reign begins and the Upper and Lower Canada Rebellions occurred). In terms of fashion, Romanticism and the influence of “dandies,” had a major impact on western men’s clothing during this time. END_OF_DOCUMENT_TOKEN_TO_BE_REPLACED

Torontoians read about Germany’s surrender on VE-Day. Old City Hall is in the background.

For Remembrance Day this year, I thought I would change things up and take a look at a couple of primary sources to see how three newspapers from Toronto described the end of World War I and II. For those interested in more traditional posts, please check out Armistice Day, The End of World War II in Canada, and Veterans’ Stories: Morkin and Strachan. END_OF_DOCUMENT_TOKEN_TO_BE_REPLACED

Halloween is around the corner so that can only mean one thing for this blog: time for me to smash Canadian history and ghost stories together yet again! For round three, some of the stories we’re going to explore include a haunted military fortress, a love-struck New France governor, and even a flaming ghost ship that people have reported seeing for over two centuries! END_OF_DOCUMENT_TOKEN_TO_BE_REPLACED

October is Women’s History Month in Canada and instead of writing about the usual suspects, I thought I would take a look at the life of a lesser known female figure in Canadian history. Alice Freeman (1857-1936), better known as “Faith Fenton,” was a schoolteacher turned popular investigative journalist. Her life was pretty remarkable not just because Alice was one of Canada’s first female journalists but because she was one of the thousands who headed up to the Klondike in 1898–except she was looking for stories, not gold. END_OF_DOCUMENT_TOKEN_TO_BE_REPLACED

The Canadian Forces faced one of their toughest battles during World War II during December 1943. Their goal? Capture the small coastal town of Ortona, Italy. The Canadians fought their way through rubble-covered narrow streets, booby-trapped houses, machine-gun fire, and concealed landmines throughout the town. As the CBC described it, Ortona was a battle in the “courtyard of hell.” The Canadians were successful in the end, but at a cost of 2,200 casualties. Was it worth it? (Shout out to GP Cox for inspiring me to research this battle!) END_OF_DOCUMENT_TOKEN_TO_BE_REPLACED